Best castles to visit in Wales

by Coast and Country Holidays / Wales

We show you what to see and do in Wales

Dotted all over the welsh landscape are over 100 of the original 600 castles that made Wales the capital of Castles. Some are now privately owned and have been turned into events venues, hotels or even homes but of the ones that are still in public ownership below is our guide to the best.

Caerphilly is the largest and in a recent survey was voted to be the best in the country. The stunning location in the heart of Caerphilly town, the leaning tower and the surrounding moats and islands make this beautiful castle a popular visitor attraction. TV and film companies have used it many times as a backdrop and the most recent to give it a starring role was the television series Merlin. Caerphilly castle is a perfect place to spend a day with the family and there are events held throughout the year to suit all ages. 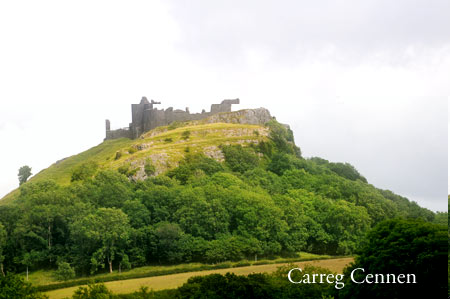 In contrast to the huge fortress in Caerphilly the ruin of Carreg Cennen stands majestically some 900ft above the river Cennen in the village of Trapp near Llandeilo. With panoramic views across to the Preseli Hills to the west and the remote black mountains to the south this is probably the most dramatic and romantic of all welsh castles. Prepare to be amazed by its spectacular location, this is a place you will want to return to again and again. Today it is in private ownership due to a legal discrepancy when the Cawdor Estate sold the farm in the 1960’s, and now is a favourite for weddings, and boasting a well stocked gift shop and tea room..

Caernarfon Castle, (voted 3) is a monster fortress on the banks of the River river Seiont on the Menai straights between north Wales and Anglesey. Looking the same today and it would have done when it was built in 1330 it was the birth place of the first Prince of Wales and was the setting for the investiture of Prince Charles in 1969. Many a school project has been based on this castle and today numerous exhibitions and displays can be viewed throughout the castles towers, enhanced by a film show explaining the castles history. A climb to the top of the turrets will be rewarded with stunning views of the town and the Menai Straits. The castle and town are said to have many ghosts including those of English soldiers sent to guard the town against the native Welsh.

In the heart of the capital and well worth a visit Cardiff Castle, with its beautiful parkland, with resident peacocks is an impressive sight . With a history that spans 2000 years, from 55- AD to the present day the castle has been extensively remodelled and enlarged. In 1866 the 3rd Marquess rumoured to be the richest man in the world employed the architect William Burges to transform the Castle lodgings. The lavish and opulent interiors have to be seen to be believed, each room having its own theme being rich with Marble, Stained Glass gilding and elaborate wood carvings. William Burges is also responsible for the interior design of the 3rd Marquess’ 2nd castle, Castell Coch the Red castle. 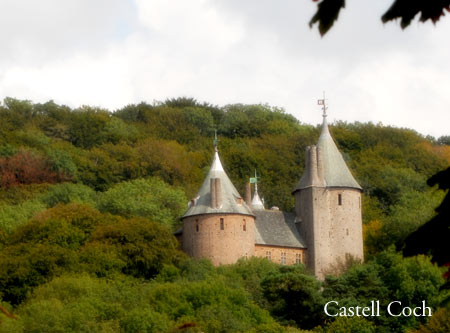 Known as a romantic folly, and a landmark for many as they travel the M4 it peeps out above the trees at the head of the Taff Gorge. Built in the 1870’s Castell Coch is relatively modern and the by-product of untold wealth and Victorian imagination. This romantic fairytale place is every little girls dream of the princesses castle. Today if you wish you can hire the drawing room to have a civil wedding ceremony or spend the day exploring the castle and the over the top decor so loved by Burges.

The Birth place of Henry V11 Pembroke Castle is the largest privately owned castle in Wales. An enormous oval castle, almost completely surrounded by a mill pond was extensively restored in Victorian times. The walled town of Pembroke which grew up around the castle also contains many ancient Norman buildings. Used in 1976 to film the jousting scenes in the “Jabberwocky” today Pembroke Castle is a busy and thriving visitor attraction known for its family entertainment, dragon days, exhibitions and story days. There is also a cafe and gift shop. During school holidays there are falconry displays, historic re-enactments and family entertainment. The main exhibition rooms display models and weaponry as well as telling the story of the history of the castle. You can also visit the room that King Henry VII was born and climb the 80ft great keep to enjoy the views.

The view from the top of Harlech Castle alone is worth the visit, but be prepared to have a workout, it’s a long way up to the highest turret. Men of Harlech the unofficial Welsh national anthem loved by rugby fans is said to describe the longest siege in British history (1461-1468) which took place here during the War of the Roses. Its spectacular location rising up from a near vertical rock face, overlooking the land and the sea would in itself been daunting for anyone wishing to attack this stronghold. A walk along the turrets, not for the faint hearted, gives unrivalled views across to the sea and in the distance Criccieth Castle.

Raglan Castle on the Welsh borders in Monmouthshire another beautiful castle and a great day out, can also boast TV credits as a backdrop to an episode in the TV Series Merlin. Everything’s great about this place, from its great tower, to the great gatehouse, which makes the visitor gasp, just as its owner intended. Raglan was not built for battle but more for show, the huge mullioned windows and the oriel window, a massive bay window are just two of the of the Castles characteristic features. Even being a good looking castle it still manage to hold off Oliver Cromwell’s forces for thirteen weeks in one of the last sieges of the Civil War. A full calendar of events is held at the castle today which includes traditional woodturning. Archery, medieval games and for the adventurous why not try on an original suit of armor. 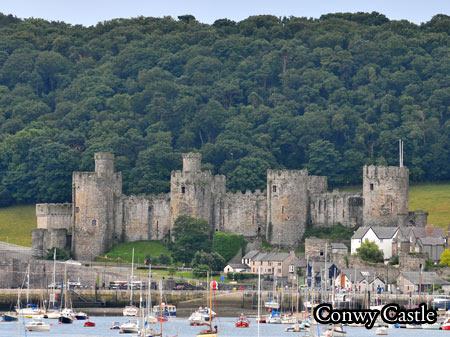 Conwy Castle is the classic walled town. Its circuit of walls, over three quarters of a mile long and guarded by no less than 22 towers, is one of the finest in the World. The first time that visitors catch sight of the castle, which sits on top of a rock in the Conwy Estuary it is obvious that this place has a magical quality and is one of the best preserved in North Wales, built by Edward 1 as one of his key fortresses in his “iron Ring” of castles to contain the welsh it was built to promote a humbling reaction. Attracting visitors from all over the world the views from the battlements, which are still are still intact today, are breathtakingly beautiful spreading across across the mountains the town and the Estuary. A delight for children who can let their imaginations run wild. Although not the largest Conwy Castle is one of Wales best tourist attractions which may be due to the ghostly tale of Dr Dic.
“One of Robert Wynn’s successors at Plas Mawr had to leave Conwy to fight in a distant war. When the time was near for his return, his wife and child climbed the steep stair to the lookout tower. He was late, and the wife and child had to leave the tower because of darkness. On the way down she slipped, and, along with her child, fell to the bottom of the tower. They were taken to the lantern room. Doctor Dic was summoned but stated he could do nothing to save them. Fearing the wrath of the lord upon his return, the servant locked Dr. Dic inside the lantern room with the dying family. Upon the Master’s return, the door was unlocked. He found the dead bodies of his wife and child, but not Dr. Dic. The Doctor was never seen again. The bereaved husband eventually went mad with grief and died soon after. His ghost still seeks the missing doctor in the lantern room and will continue to do so until he is found.”

Back to our Wales Guide…

by Coast and Country Holidays / Wales

Get involved in the Discussion

5 Things You May Not Know About Wales

Reading Time: 1 minute We show you what to see and...

Reading Time: 3 minutes We show you where to go and...

The Parks of Wales

Reading Time: 3 minutes We show you where to go and...