by Coast and Country Holidays / Day Out Guides

Jo shares her experience of running in the Gwaun Valley

The Gwaun Valley (Cwm Gwaun), situated in the North Pembrokeshire area of the Pembrokeshire Coast National Park is a beautiful, unspoiled wooded valley full of mystery and history. Despite having visited North Pembrokeshire many times (and now living here), the Gwaun Valley remained very much unknown to me so I decided that it was about time I explored it. As a runner you become very aware of the terrain around you and whilst hill running is a good component to add to your training, when you want to clock up some miles for your weekly long run a relatively flat route is what you need. I’d heard local runners say that they drive to the head of the Gwaun Valley to make use of the miles of valley road for their long run because it’s flat! Rather than tackle the usual contours found in Pembrokeshire I decided to do the same and was looking forward to a welcome, flat jaunt along the valley floor whilst hopefully not having to worry about too much traffic.

Living just outside the valley I thought driving to the start would be cheating a bit so I set off from the front door on foot. You would have thought getting into a valley wouldn’t have been too much trouble, but I guess this is Wales! After a lung-busting, calf-burning stretch of road that did require me to worry about traffic (I tend to plod up hills) I was glad to descend, rather steeply, down into the valley whilst trying not to think about the return journey up the hill.

All I can say is when I got there it was worth the effort. As I descended into the valley the silence descended with me and I felt like I had just walked (run) into the pages of one of the many fantasy novels that line my bookshelf. The lanes were impossibly narrow despite the farmland and buildings that I passed, but there wasn’t a soul or vehicle in sight giving me the immediate impression of being completely alone. Melting glaciers carved out the valley during the last Ice Age leaving behind steep wooded sides with the River Gwaun running along the valley floor to enter the sea at Fishguard (Abergwaun). This was the first thing that caught my attention; a constant burbling of shallow water over a rocky river bed merrily making its way from the Preseli Hills towards the ocean. Oh how I love that sound, a calming, almost hypnotising delight for my ears. Birds hidden from sight in the trees sang their songs with enthusiasm as I passed, whilst overhead a bird of prey glided silently along watching the valley floor for signs of food.

As I settled into my stride I began to notice the trees; gnarled, ancient, wise old sentinels that must have stood solidly for decades watching life in the valley go on. In fact the whole place felt infused with their memories; almost like I had stepped back in time and in fact you could argue that I had. The locals here (only a few hundred or so of them) still follow the old Julian Calendar, which was abolished everywhere else in 1752 in favour of the Gregorian calendar; so New Year (Hen Galan) is celebrated in the Gwaun Valley not on January 1st but on January 13th. The buildings are old too with many of them being listed. A Church sprang up out of nowhere, in the middle of nowhere, giving me an uneasy feeling of being watched as I passed the ancient headstones of the graveyards.

Then there is The Dyffryn Arms, more fondly known as Bessie’s. People come from far and wide to drink here and there were several people sat outside, pint in hand; quite happy to send a cheery greeting my way as I puffed past. The temptation to stop was strong but I knew if I did then my run would never get finished. Maybe next time I’ll carry some change with me and pop in on the return journey! The Dyffryn Arms is a delightful mix between pub and home to Bessie, who serves beer from a barrel through a hatch in her front room and has done since she was 20. The pub has been in her family since 1840 and not much has changed since then. She only serves one beer by the barrel which may not be to everyone’s taste, but the fire is always stoked, stories are aplenty and the welcome received can be enjoyed by everyone.

Leaving the drinkers behind at Bessie’s I carried on through the hamlet of Pontfaen which consists of a chapel, a small primary school, a scattering of houses and a farm. Needless to say I was quickly out of ‘civilisation’ again and once more left alone with just the sound of my breathing and the wind whispering through the trees. I do run to keep physically fit, but more importantly I run to clear my mind from the stresses and niggles of everyday life, and this was certainly doing just that. With no traffic to worry about, no hills to contend with and only a few houses, farm buildings and a tea room popping up sporadically my mind was able to completely switch off. There’s something magical about places that have that effect on you, gently steering you away from over-thinking and anxiety into meditation and quiet contemplation; a state of mind so rarely found in the busyness of life today. Maybe this is why two retreat centres can be found based in the Gwaun Valley making use of the peaceful remoteness; the Gellifawr Woodland Retreat that is a hotel and registered wedding venue, and the Christian prayer retreat Ffald-y-Brenin.

I had planned to go right through the valley to Cilgwyn, where there is the Bluestone Brewing Centre for anyone looking for some locally brewed ales and the Pembrokeshire Candle Centre. However I noticed a path beyond a gate leading away from the road into the wood so I decided to take a break from pounding the tarmac and try some trail instead. There are many footpaths meandering through the valley that walkers can enjoy and I was intrigued to find out where this one led. I enjoy exploring new places when I run as never knowing what’s around the corner adds to the magic of it all and keeps my mind away from tired legs and complaining lungs. This path wasn’t quite as flat as the valley floor but after several short, sharp inclines and twists of the path I was met by a waterfall cascading down the rocks. The river gets swallowed up a bit by the trees at this end of the valley so it was nice to find it again and I took a breather for a while just to soak up the sound of the water and the charm of my surroundings. Reluctantly leaving this tranquil spot behind I turned around and started to retrace my steps.

As I got to the end of the valley the sun was just starting to dip down behind the tree line of the steep valley sides. Beams of sunlight streamed through dazzling my eyes and filling the valley with the most beautiful hues of gold, green, brown and red. I love the colours that come out towards the end of a day, when the harshness of the sun has gone and the valley on this occasion did not disappoint.

Whilst I love Pembrokeshire for the sheer beauty of its stunning coastline and beaches, the Gwaun Valley is just as beautiful in its own, unique way. For anyone wanting to explore all that this county has to offer a wander through the Gwaun Valley is a must.

Map showing the location of the Gwaun Valley 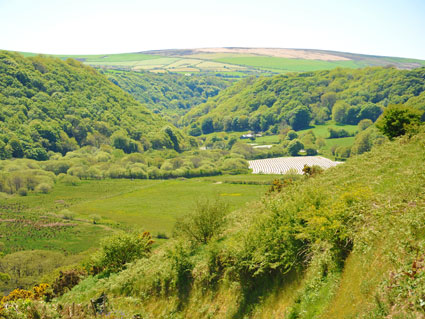 View down the Valley 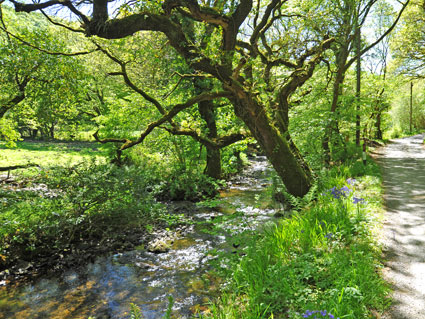 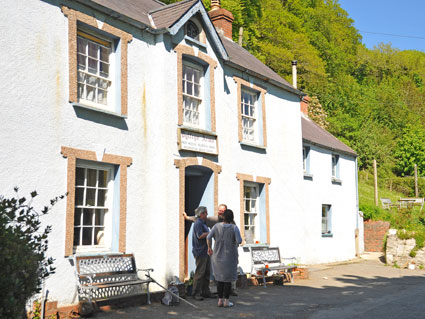 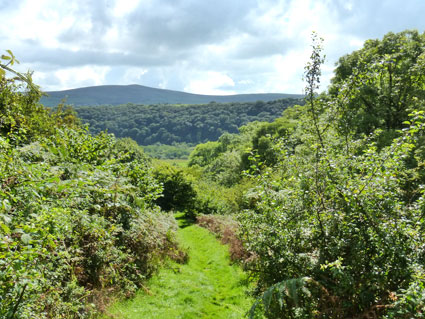 by Coast and Country Holidays / Day Out Guides

Cenarth Falls, A Picnic, and a trip to Newcastle Emlyn

With so many gorgeous places to choose from, we were truly spoiled for choice when deciding where to go...

We show you some of the best spots in Pembrokeshire Tucked away on the approach to St Annes Head,...

We show you some of the best spots in Carmarthenshire The Millennium Coastal Park is the result of the...