Nevern Castle lies on the outskirts of Nevern village, a small hamlet just off the main A487 between Fishguard and Cardigan. Nevern also has several other historic sites of interest, there is a charming village Church which has a legendary bleeding Yew tree in the churchyard, as well as a famous Celtic Cross and the ancient Vitalinus stone. It is also famous for its Ogham inscriptions. St Brynach’s Church and pilgrims route through the village, are all easily accessible and there is limited but free parking.

Nevern’s castle is of Motte and Bailey construction, and was originally a Welsh Stronghold. It was seized in the early 12 century by Norman Robert FitzMartin, Lord of Cemmaes. Later, the Welsh family of Lord Rhys and the FitzMartins were united through the marriage of Lord Rhys’ daughter, Angharad and Robert Fitz Martin’s grandson, William. The peace was short lived and in 1191, the castle was stormed by Lord Rhys and it was turned over to his son Maelwyn.

Nevern Castle sits above the village, well hidden by the surrounding woodland. On entering the grounds of the castle, it is possible to understand its scale and importance in Welsh history.

In 2009 archaeological students led by Dr Chris Caple of Durham University conducted a two week dig at the castle. The initial discoveries from the excavation were fascinating, and the success of the initial dig has led to a further dig being organized for 2010.

The whole of the Nevern area has a fascinating history and Pembrokeshire Coast National Park’s Senior Heritage Office, Phil Bennett, is also part of the exploration team so he can ensure that Nevern castle is an integral part of the story of Welsh culture and heritage.

The Castle is owned by the Nevern community council, who work closely with the Pembrokeshire Coast National Park to maintain it. Recently, Nevern castle successfully attracted funding from the Welsh Assembly government, as part of CADW’s 25th anniversary celebrations.

Map showing the location of Nevern Castle in Pembrokeshire 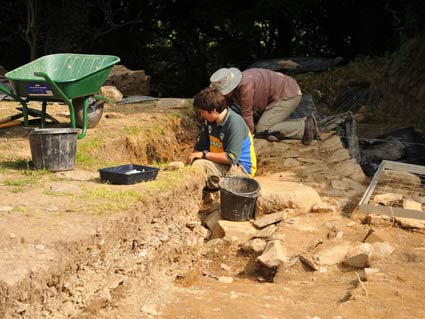 The excavation team at work 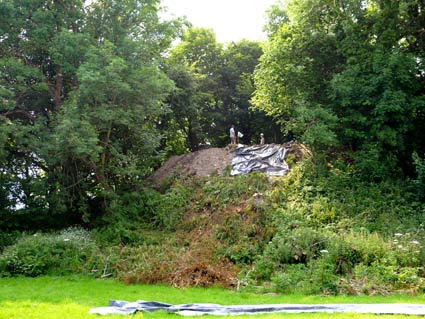 The Motte at Nevern Castle