Penbryn (just north of Tresaith) is probably the most unspoilt beach on the Ceredigion coast. Thanks to the stewardship of the National Trust there are no commercial enterprises of any sort at the beach – not even an ice cream kiosk!

It is, quite simply, just a beautiful, mile long, beach with not a building or beach hut in view. All visitors have to leave their cars in the car park at the top of the hill and walk the 400 yards or so down the lane to the beach. A turning circle serves as a “dropping off” or “picking up” point for those who find the walk difficult.

Few lengths of sand in Britain, have no commercial development of any sort and this is what makes Penbryn unique. When the tide is out, another small and private bay is accessible (past the rocks, so watch the tide!) At low tide it is also possible to walk to Tresaith.

The rocks at the Northern end have a dark history:
“On the beach is a flat rock, called Carreg Morwynion, or “the Maidens’ rock,” from the circumstance of several females having been drowned while bathing there” Samuel Lewis – A Topographical Dictionary of Wales – 1833

There is an abundance of sea and bird life. Seals and Dolphins being the most visible, but it is also a paradise for bird watchers.

Sometimes seal pups get washed up on the beach – don’t approach them. The rules are simple:

There is also a woodland walk from the car park beside the river Hoffnant. The path eventually emerges at the small bridge near the turning circle. The river has its outflow on the beach and effectively divides it in two – unless you are willing to take your shoes and socks off and wade across! (it is very shallow, so is quite safe to cross, even for small children).

Nearest food and drink to Penbryn can be found back up the lane in the The Plwmp Tart (a half mile or so) in the small cluster of houses.

The walk to the beach is also steeped in “nefarious deeds” The valley is known as Cwm Lladron (the Robber’s Valley) for Penbryn was a well known destination for illicit Irish cargoes in the 18th Century.

“Howell Harris, a Methodist Revival leader, visited Llanborth in 1743 and preached against “the Liberty of stealing wrecks, cheating the King of things excised and their inhuman behaviour towards the poor shipwrecked sailors…..that better men fall amongst Heathens than here”. To him, Penbryn was “a dark country”.

Illicit goods such as wine from Bordeaux, spirits and salt from Wicklow, tobacco and tea were brought in considerable quantities by French and Irish vessels as well as locally owned vessels.”

Llanborth Farm, where the car park is situated has had an interesting history. Originally a Manor house, it has had a number of “ups and downs” over the centuries:

“Llanborth was formerly an ancient mansion belonging to the family of Rhys ab Rhydderch, Lord of Tywyn ; in default of heirs it fell to the lord of the manor, and was afterwards the property of Colonel Baily Wallis, who sold it to R. Hart Davis, Esq.”

There is an ancient stone with the inscription as “CORBALENGI IACIT ORDOVS” Variously translated as the “The Lair of Corbalengus (who was) an Ordovician” Originally reported in 1695 (Gibson’s Camden) as being “not far from the Church” it has now seemingly wandered over to a nearby field.

A more recent claim to fame is that the beach became Korea for the filming of a James Bond epic “Die another day” A beach hut shown at the end of the film was built on the hillside above the beach. All did not go exactly to plan!

“a local farmer, who had been helping to provide the catering for the film unit, trundled his muddy JCB tractor digger into the background of a key scene that was about to create a helicopter crash. The sequence had to be re-shot in a take 2. The farmer, Emyr Brown, apparently quipped to the press: “At least my digger had a cameo role in a James Bond film”.

Penbryn Organic Cheese, though named after the hamlet & beach is not actually produced there, but in the nearby village of Sarnau. “Llanborth was formerly an ancient mansion belonging to the family of Rhys ab Rhydderch, Lord of Tywyn ; in default of heirs it fell to the lord of the manor, and was afterwards the property of Colonel Baily Wallis, who sold it to R. Hart Davis, Esq.” 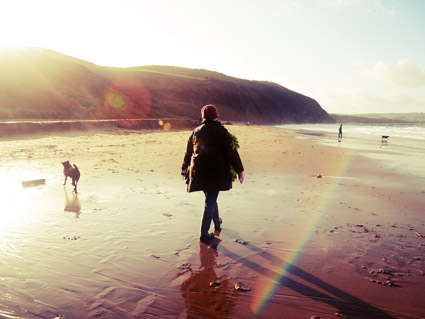 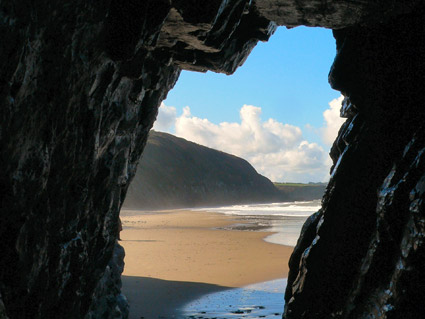 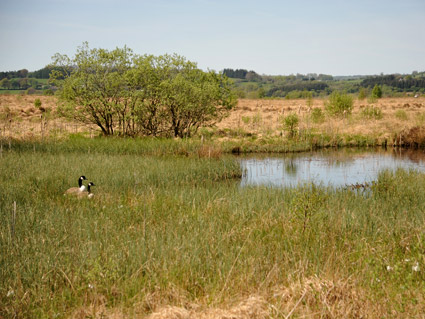