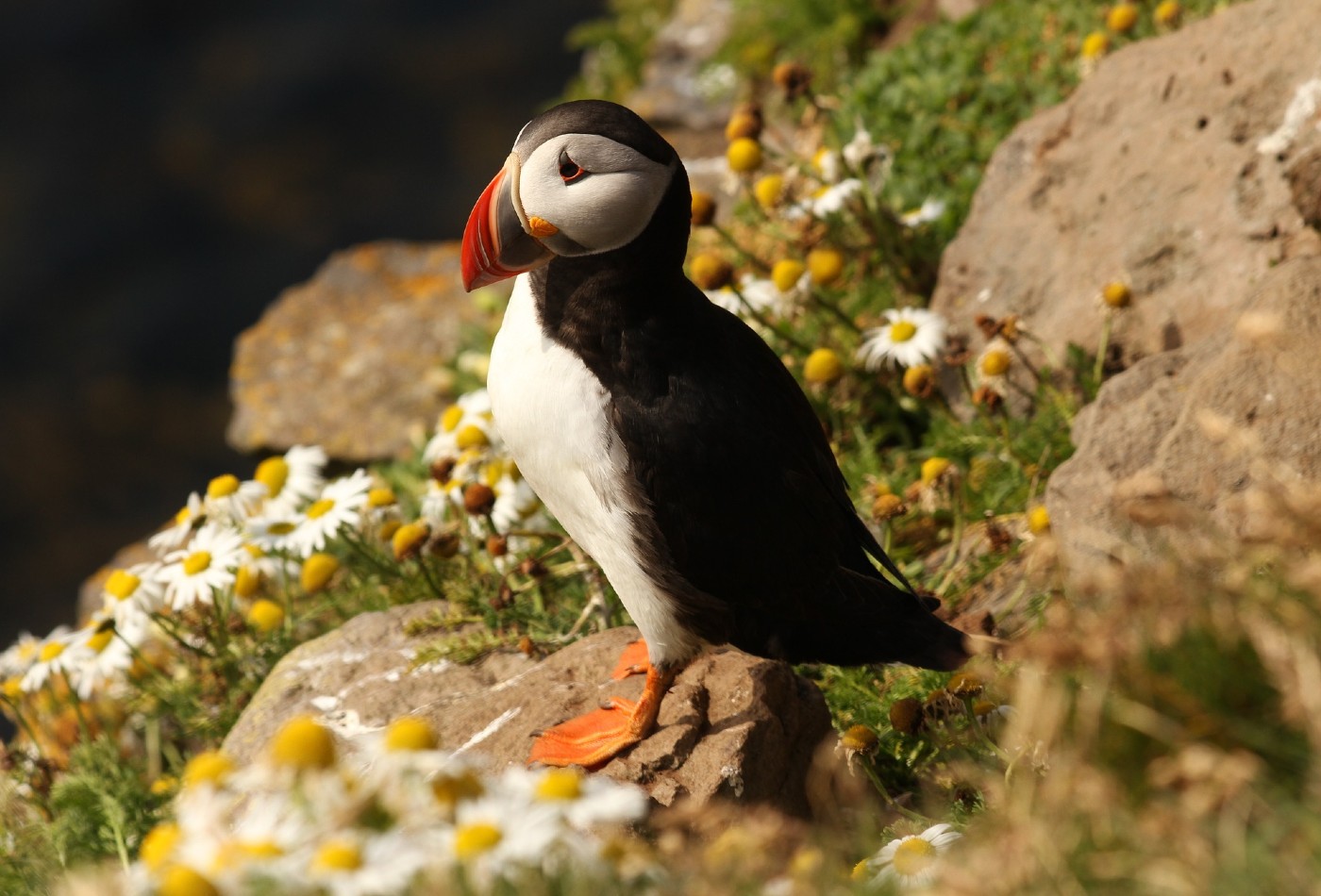 A Day Out to See the Pembrokeshire Puffins

The Atlantic Puffin (Fratercula arctica) is a member of the Auk family and spends most of its life at sea. They return to their nesting sites on Skomer in April, staying until August, with the largest numbers present from June to Mid-July.

Our journey to see Pembrokeshire puffins! 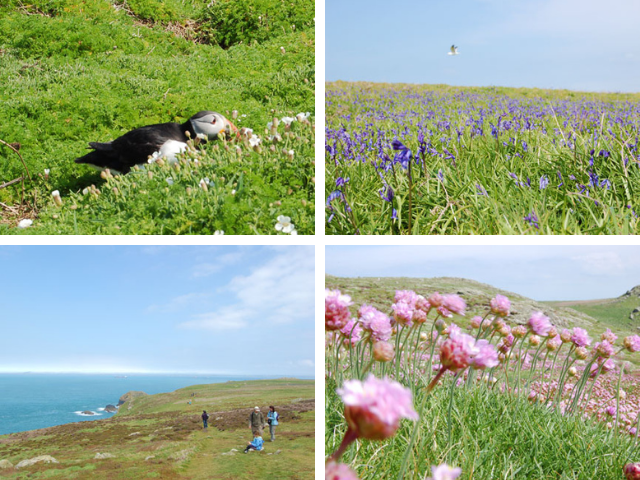 Waiting for the boat

I have always wanted to see puffins but have never been in Pembrokeshire at the right time. But in the summer of 2018, together with my partner, we were able to take the Dale Princess from St. Martin’s Haven over to Skomer, one of the UK’s puffin hot spots with approximately 6000 breeding pairs. Skomer, a 15 minute boat trip from St. Martin’s Haven, is the largest of Pembrokeshire’s islands and has the largest and most accessible colony of seabirds in southern Britain. It is owned by NRW (Natural Resources Wales) and managed by The Wildlife Trust of South & West Wales.

Trips to the island cannot be booked in advance and are weather dependent. There are only three sailings a day, from Tuesday to Sunday, at 10am, 11am and 12 noon, so we had been told to get there early. We arrived around 8.30am. The National Trust car park at St. Martin’s Haven was already busy, with potential visitors for Skomer queuing for landing tickets from the Lockley Lodge Visitor Centre and on down the lane. We were lucky and secured places on the last sailing at 12 noon!

While waiting for our boat, we walked around Marloes Deer Park, which is owned by the National Trust and the site of the largest promontory fort in south Wales, dating back to the Iron Age. We then walked out to Wooltack Point, where you can look across Jack Sound towards Skomer. There are also spectacular views out to sea, with Skokholm to the south, Grassholm in the distance and St. Bride’s Bay to the north. The waters around Skomer, Skokholm (and the rocky islet of Middleholm) are part of the Skomer Marine Nature Reserve, one of only three such reserves in the UK.

All aboard the Dale Princess!

It was then time to walk down to St. Martin’s Haven beach and board the Dale Princess. There had been a recent jelly fish bloom and the waters of the little bay were full of compass jelly fish. We soon left the shelter of the bay and started to head for Skomer. Before long we spotted our first puffin, skimming just above the waves, heading back to Skomer with a beak full of sand eels. Before long there were puffins everywhere you looked! We docked at North Haven and started the steep climb up the 87 steps to the reception site, all the while aware of hundreds of sea birds around us, not just puffins, with their calls echoing off the cliffs. Already we could see puffins coming in to land and disappearing down burrows to feed their puffling. If this was as close as you could get to puffins, then I was happy. Little did I know what else was in store for us!

At the reception site, we were met by the wardens, who give a talk about the island in general and what you might spot on that particular day. They also explain the importance of following the Code of Conduct while observing the birds, respecting the island’s delicate habitat and keeping to the designated paths. Skomer is riddled with intricate tunnels and burrows, made by the island’s rabbits, puffins and the world’s largest colony of Manx shearwaters, numbering more than 200,000 pairs. We were then free to explore.

If you like cafes and loos on every corner, and somewhere to go if it rains, Skomer is not for you. Towards the centre of the island, at the old farmhouse, there is a sheltered picnic area, compost toilet and small visitor’s centre. But you need to take your own refreshments and be prepared for all weathers.

As our main reason for coming to Skomer was to see puffins, we decided to head straight for The Wick where the main nesting sites are. As we got closer, the path became roped off on both sides and there was a line of people standing quietly with cameras and binoculars. We couldn’t at first work out what was happening, but then realised that either side of the path was riddled with holes and there were puffins just feet away from the spectators! We joined the line and kept still and quiet. Puffin after puffin came in to land, just outside its burrow, and scurried inside with its full beak of sand eels. Some stopped to preen before flying off again to collect the next beakful.

They were flying between our heads or landing behind us and waddling across the path between our feet to reach their burrows. They seemed oblivious to our presence, so determined were they to reach their puffling, which you could hear calling to its parent from underground. I had no idea that you could be so close to them! As they jockeyed to land, you could see the gulls waiting to rob them of their sand eels, by harrying them in flight until they dropped them.

The poor puffin would then have to head back to sea and try again. All the while, we stood entranced. The colouring of their beaks, eyes and legs was such a contrast to their otherwise sober suit of black and white. They are smaller than I imagined, too, being 11-12 inches from bill tip to tail tip. They also seemed very amiable birds. There was no squabbling between neighbours or raucous calls, just a gentle ‘burring’ sound. We didn’t want to tear ourselves away, but wanted to see as much as we could of the rest of Skomer before returning to the mainland.

We carried on by the coast path, taking in the sea views and the coves where seals come to pup in the autumn, lingering as long as we could before having to make our way back to North Haven for the return boat. Now, while waiting to board Dale Princess, and watching the Skomer Island puffin’s to-ing and fro-ing in their ceaseless efforts to feed their chicks, we could really appreciate what these amazing birds had to do to survive and thrive.

Looking for some quirky attractions and activities? Check out our list of unusual things to do in Pembrokeshire!

Keen to see the Pembrokeshire puffins for yourself? Enjoy a stay in one of our cosy holiday cottages near Skomer Island, ideally located close to all the incredible attractions in the region. 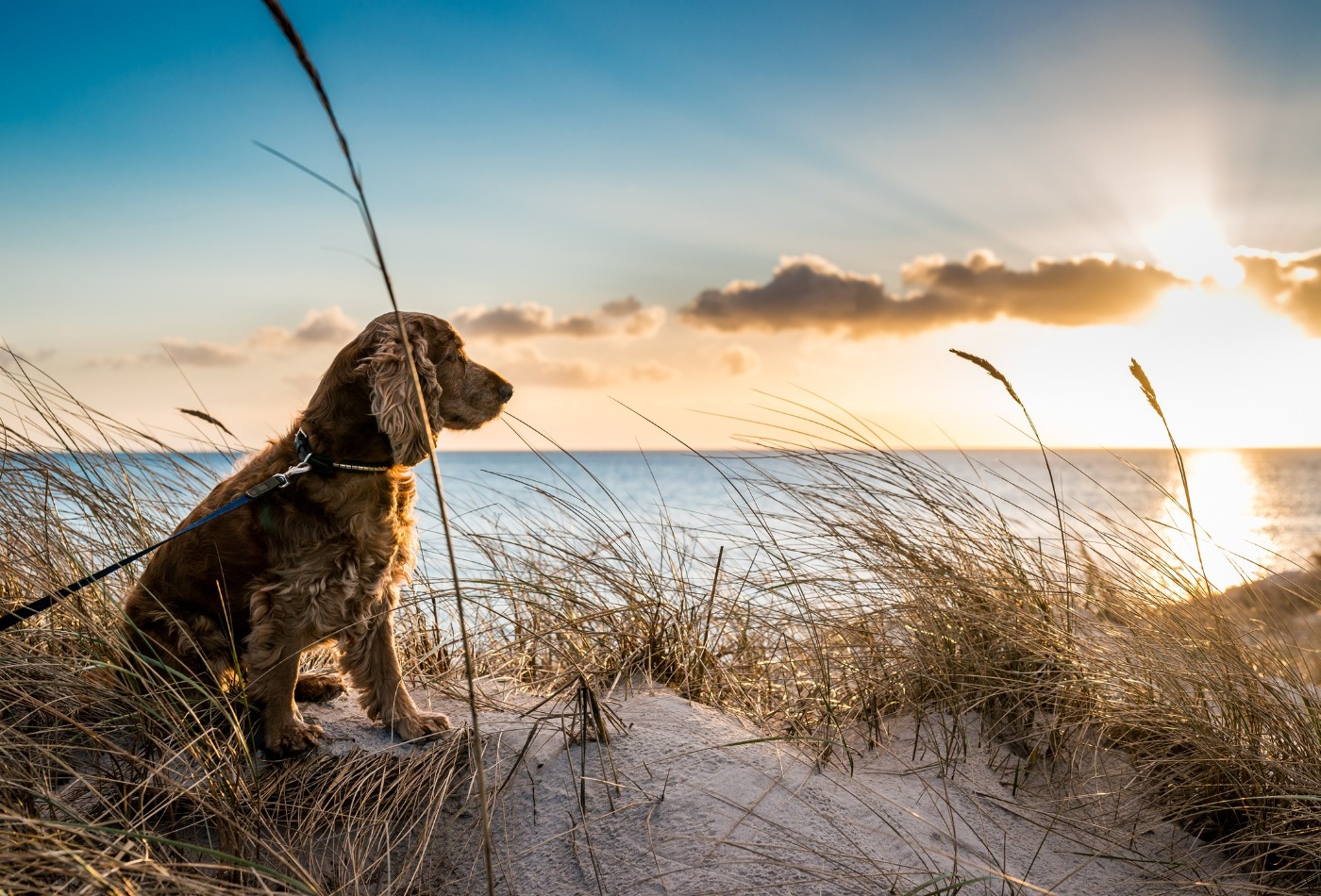 Why Visit Wales? Not that we’re biased or anything, but we think Wales is one of the most beautiful... 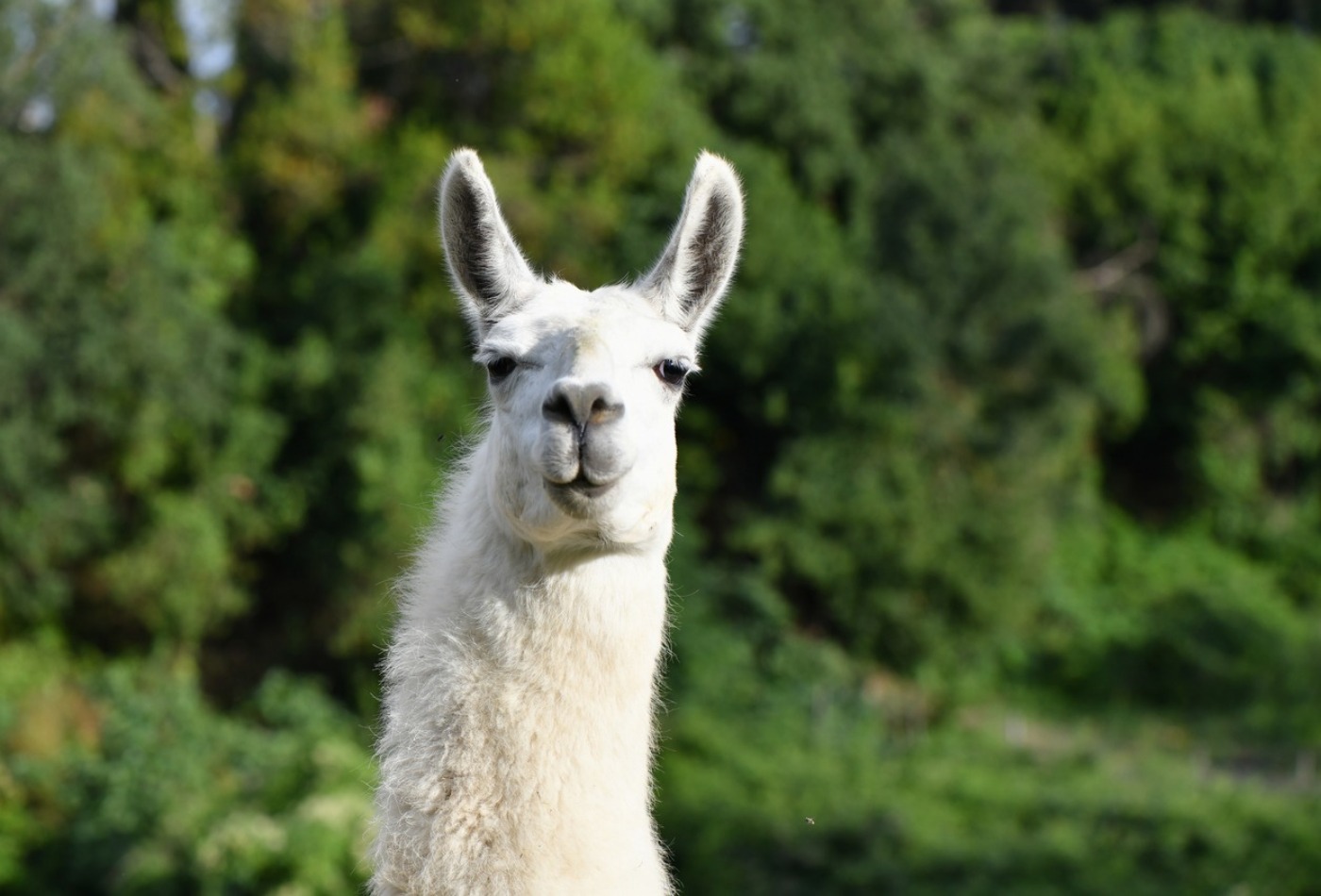 9 Unusual Things to do in Pembrokeshire

For fans of all things quirky and out of the ordinary, there are lots of unusual things to do... 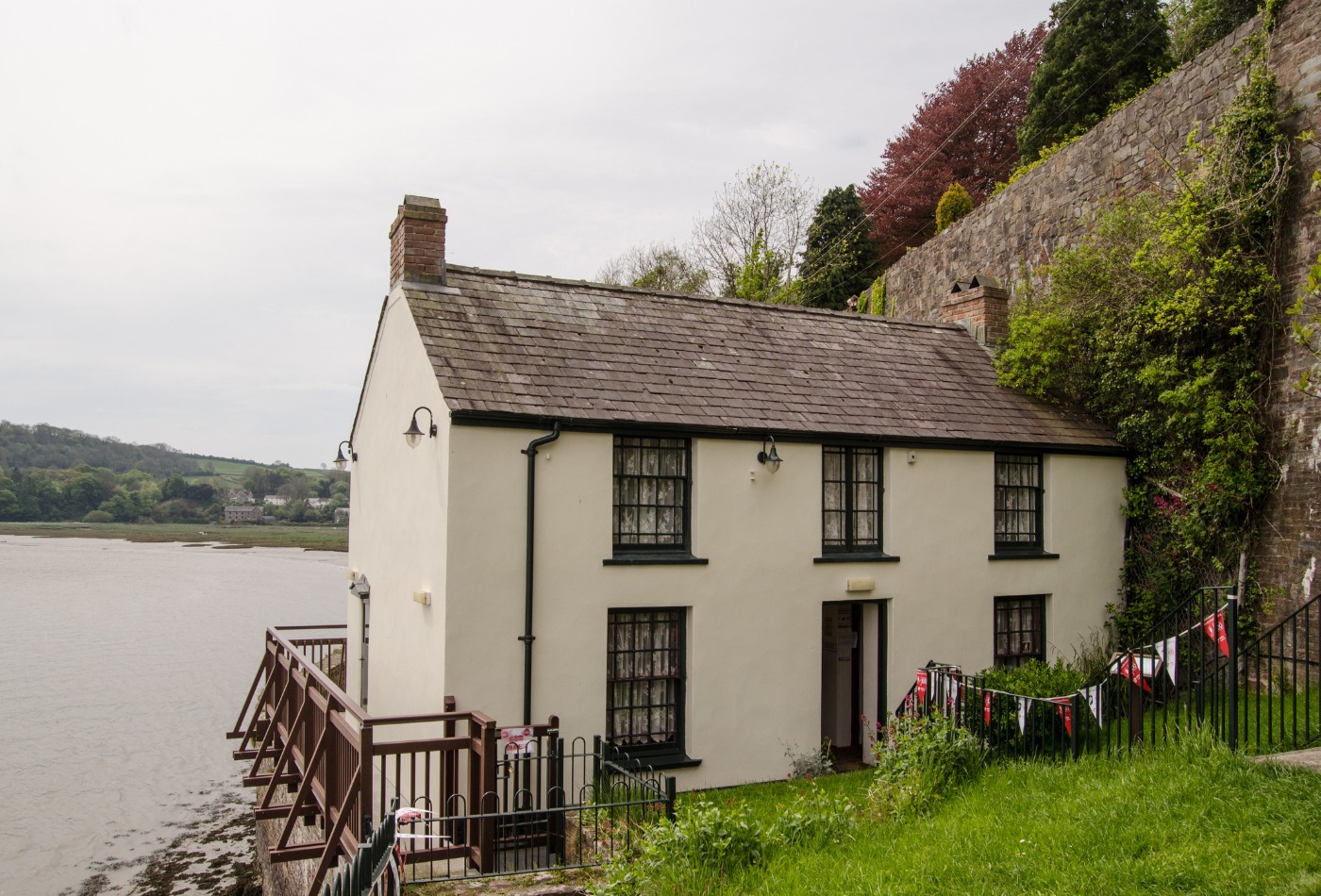 11 Things To Do in Carmarthenshire

If you’re planning a visit to Carmarthenshire, then chances are you’ll want to do a bit of sightseeing during...