The Smaller Islands of Wales

A great way to explore Wales and see its rugged coast line, beautiful scenery and huge range of wildlife is to take a boat trip around one or more of the Welsh offshore islands. Each island is unique and has different sights and wildlife on offer and there are also different types of boats to choose from too. Children will love exploring the islands and spotting all the different wildlife like birds, fish, dolphins, seals, toads, cattle, glow worms and much more and they even love the boat trip to and from the island as they see it as a little adventure; though adults often feel the same way too.

There aren’t just things for bird watchers and children on offer at the islands but there are often beaches and plenty of chances for a romantic/relaxing stroll along stunning coastal paths and sandy shores and a whole range of other activities depending on the island.

There are lots of offshore islands to explore and we have just mentioned just a few of the most popular. So whether you’re staying in Wales for a week or just a short break there is plenty of choice of Islands to visit and plenty of other sights and activities for everyone but Wales is also the perfect destination for a relaxing or romantic holiday. 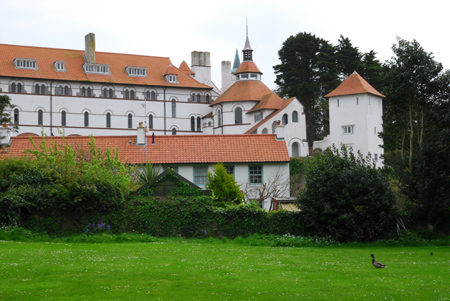 Caldey Island is a great island to visit when you’re on your Holiday in Pembrokeshire, it isn’t just a beautiful island with a sandy beach but it is also home to a stunning working monastery. The Island is also known for its rare flowers and many species of birds that are especially common during the summer months.

There are roughly 40 Cistercian monks that live and work at the monastery and they make many things like cheese, chocolate, shortbread, perfume and other toiletries and sell them in the village shop.

There is plenty to see and do when you’re on the island like visit the abbey church, the museum, the lighthouse, the Old Priory and the medieval churches of St David or why not get a free guided tour around the island.

There is a large sandy beach for you to enjoy and have a picnic or on a cold day why not go up to the tea gardens and have a hot drink and a snack to warm you up.

The ferry to the island departs from the popular resort town of Tenby which is only 2.3 miles from Caldey Island. The ferry services runs every half hour (weather permitting) in the Spring and Summer months and will depart from Tenby Harbour during high tide and will depart from Castle beach when the tide is low. 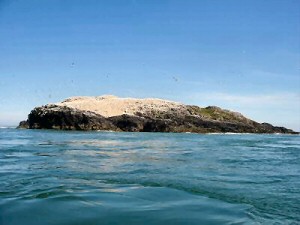 Grassholm is a small island that is roughly 8 miles off the coast of Pembrokeshire that is known for being the breeding site for 10% of the world’s population of Gannets which makes the National Nature Reserve on the island the 3rd most important site for gannets in the world. There is not just gannets here but also other birds as well as seals, porpoises and bottlenose dolphins are common in the waters too as it is a good feeding ground for them. There is always an abundance of birds on the island so if you do visit during your stay in Wales then make sure that you bring your camera. You really will be surprised at the amount of birds on this island and the sound of the bird’s calls is just amazing.

Boat trips to the island sail from the lifeboat station at St Justinians and on the mainland at Martins Haven. 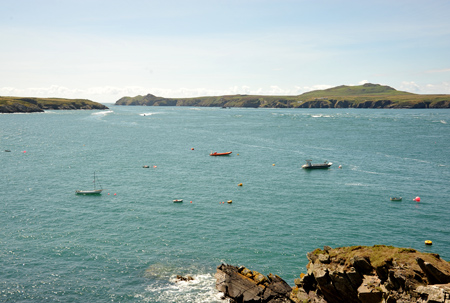 Ramsey Island is off the coast of the St Davids peninsula and is the 3rd largest island in Wales and boasts a large variety of wildlife and is owned by the Royal Society got the Protection of Birds. The island is known for being one of the most important grey seal breading colonies in Britain but there are lots of varieties of birds that visit the island. Some of the birds that you may spot include Choughs, gulls, razorbills, guillemots, ravens, buzzards, Manx shearwaters, peregrines and northern wheatears. As you can imagine there will be plenty of photo opportunities for pictures here.

Weather permitting the boat trip that sails around the island departs from the lifeboat station at St Justinians and runs 7 days a week from April to October.

Skokholm Island is off the southern Pembrokeshire coast and is the 5th largest island in Wales and is part of the Pembrokeshire Coast National Park. The island is set inside a marine reserve and is full of lots of different varieties of birds and wildlife along with a selection of plants and pretty scenery. The island is known for having the 3rd largest Manx Shearwater colony in the world but they also have over 4000 puffins, 2000 razorbills and Guillemots along with 25% of Europ’s population of storm-petrels. The list doesn’t stop there; there are also 3 varieties of gulls, choughs, skylarks, wheaters and lots of other passing migrants birds. Reefs surround the island and the waters are rich with fish and this makes it a good feeding ground for dolphins, seals and porpoises.

Boat trips to the island can be caught from Martin’s Haven and if you really want to make a day of it then why not take a trip around the 2 islands of Skokholm and Skomer. 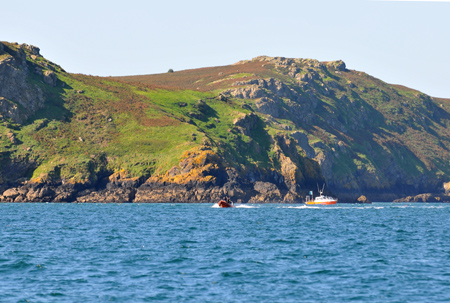 Skomer Island is also off the southern Pembrokeshire coast and like its sister island is full of wildlife and is a National Nature Reserve. The sheltered bays and inlets attract a huge array of wildlife and over 30% of the world’s population of Manx Shearwaters nest here as well as having the largest colony of Atlantic Puffins. There are plenty of other varieties of birds that can be seen on the island like gulls, storm petrels, razorbills, guillemots, great cormorants, falcons, common shags, owls, kestrels. There are lots of other wildlife to look out for like toads, seals, porpoises, dolphins and glow worms just to name a few so children would have plenty to look out for and keep them entertained. It is also the only place in the world that you can find the Skomer Vole so that in itself is worth a visit but other sights worth getting your camera out for other than the amazing scenery are the stone circles and remains of the prehistoric houses.

The boat to the island departs from the mainland at Martin’s Haven between April-October and the trip takes roughly between 15-20 minutes to get to the Island. Why not book a holiday cottage in Pembrokeshire and visit the island or really make a day of it and take a trip around the 2 islands of Skokholm and Skomer. 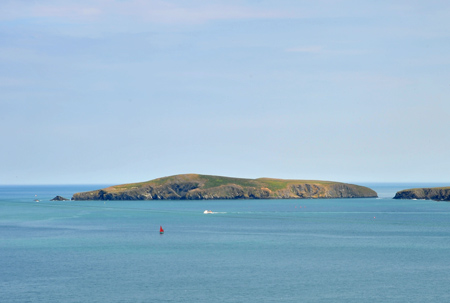 Cardigan Island is a small island off the Ceredigion coastline and is known for its beautiful scenery but mostly for the frequently spotted small colony of Grey seals that nest in the caves below, and the Cardigan Bay dolphins. There are lots of birds that visit and nest on the island like razorbills, common shags, guillemots, fulmars, cormorants and a number of different varieties of sea gulls.

The Wildlife Trust now own and manage the island and they limit the amount of visitors to the island to preserve its beauty and wildlife. Visitors to the island can visit the Cardigan Island Farm Park which is just 200 yards off shore at Gwbert and has animals like llama, ponies, sheep, goats, different varieties of pigs and cattle along with emus and wallabies so the whole family will be entertained. On wet days there are indoor games, a sandpit and an indoor adventure playground to keep the children entertained. Also the farm park is a good place to visit when the weather is not calm enough to travel to the island by boat as it gives excellent views of the island and the caves below to spot the Grey Seals.

The only way to get to the island is by chartered boat from either Cardigan or Gwbert during calm weather but permission is needed to visit the island from the Wildlife Trust, this can be arranged by calling their office.

We have a selection of Holiday Cottages near Cardigan Island – ideal if you want to stay nearby.

Bardsey Island is off the coast of the Llyn Peninsula in Gwynedd and is the 4th largest island in wales. It’s now known for its wildlife, rugged scenery and also has laid claim to being the burial site of King Arthur and also 20,000 saints. The island is now a National Nature Reserve and has a bird observatory to spot all the different types of birds that nest on the island and some that pass through on their migration path. There are also rare plants, dolphins, porpoises to be seen and it is also one of the best places in the whole of Gwynedd to spot grey seals.

There are plenty of other things to see on the island like the lighthouse, beach, mountain, small shop, chapel and the small harbour that you may arrive at depending on the level of the tide. The island has attracted artists, musicians and writers and has also been the inspiration for some award winning literature so as you can imagine the island is worth the visit.

Boat trips to the island mainly depart from Porth Meudwy near Aberdaron and as a general rule guests are permitted to roughly 3.5 hours to explore the island.

Puffin Island is a popular island to visit off the coast of Anglesey and is known for its Puffin population and other bird life but live all of the other Welsh islands there are often dolphins and porpoises spotted around the island and a colony of grey seals live on the eastern side of the island. The island is the 9th largest island in Wales and is now protected mainly because of it has one of the largest colonies if Great Cormorants but also for its other species of birds like the puffins, razorbills, guillemots, gannets, shags and kittiwakes to name a few. The island is privately owned and visitors can only come on to the island if they have special permission from the Baron Hill estate.

There are few options of boat trip to suit everyone like one that combines a trip around the island including fishing and one that takes you to the Telford suspension bridge. The cruises have views over Snowdonia Mountain Range and Penmon Lighthouse so it’s another island that you’re really going to make sure that you have your camera at the ready for.

The trip will take just over an hour and sails from Beaumaris in the summer months and its recommended to book in advance as the trips to the island are quite popular.

Back to our Wales Guide…

5 Things You May Not Know About Wales

We show you where to go and what to see in Wales You may not think of Wales as...

The Parks of Wales

We show you where to go and what to see in Wales Anglesey Parks & Open Spaces Holyhead –...