Strumble Head and the Gwaun Valley walks with our dog

Great walks with your dog – Strumble Head and the Gwaun Valley

This article was sent in to us by Gill.

A week in Pembrokeshire simply wasn’t long enough for us and our four legged friend to enjoy this lovely county in South West Wales, bordered by sea on three sides and 16 blue flag beaches, we were spoilt for choice!

We arrived at our holiday cottage late Saturday afternoon; it was situated near to Strumble Head and within the Pembrokeshire National Park in the North of this wonderful County.

We were really pleased with our holiday cottage, very well appointed, immaculately clean and un spoilt views over fields to the coast and within striking distance of the 186 miles Pembrokeshire Coastal Path. We put down our luggage, picked up that Dog lead and off we went up the lane towards what looked like the end of the world. We stumbled across a memorial stone overlooking the bay and a small craggy island, it was in memoriam to Dewi Emrys, a welsh poet and somewhat controversial figure, a minister, womaniser and a beggar! This memorial is in the shadow of Garn Fawr, a rocky volcanic outcrop. We scrambled up to the top only to be met with magnificent panoramic views over the North Pembrokeshire Coast. It contained one of the most spectacular Iron Age forts in Pembrokeshire and then during the First World War became a lookout point. We could just see a glimpse of Strumble Head Lighthouse, with its head poking up between the cliffs in the distance!

The walk around Strumble Head was then added to our list of things to do!

It was then back to our Holiday Cottage, a quick and easy meal accompanied by a bottle of white (and a bottle of red)! The Dog fast asleep on the lovely cool stone floor, avoiding the heat from the Wood Burner which we humans had curled up on the sofa in front of!

Map showing the location of Strumble Head in Pembrokeshire

Sunday morning and the weather was clear, the birds were singing and Cows had appeared in the field next door, breakfast on the picnic table looking out over the vast sky. We decided that a stroll through the Gwaun Valley was in order, we’d heard about “Bessie’s” so wanted to go and see what all that was about, we had also heard that Bessie was fond of dogs so of course, a dog friendly pub along a dog friendly walk just had to be done!

We drove from Fishguard to Pontfaen, parked up and then started exploring this magical, wooded valley and it wasn’t long before we spotted a Red Kite hovering above the tree canopy. The valley was created during the last ice age, which was evident by the steep sided valley with a real abundance of flora, fauna and wildlife.

After about 3 miles we stumbled across “Bessie’s”, real name being The Dyffyrn Arms. We entered through a very dark corridor and caught a glimpse of Bessie sat in the front of the Range to our right, we turned to the left and there it was the hatch in the wall! Real Ale, who knows what type? Served through the hatch in the wall! Nothing else on offer here so even if you’re not a real ale fan you have very little choice! A couple of wing back chairs placed in the tiny lounge area were occupied so we sat outside. To add to the authenticity there were two cart Horses outside, each pulling what looked like traps, upon talking to the Owners they had ridden the horses and carts from Crymych which was about 14 miles away, just for the exercise!

Perhaps we should book here for New Year, not sure which one through, January 1st or January 13th? Maybe both!

For more places you can take your dog, see our guide to the dog friendly beaches of West Wales…

Map showing the location of the Gwaun Valley in Pembrokeshire 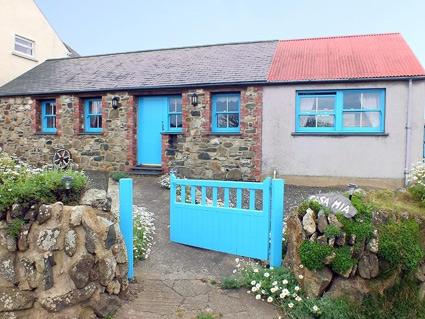 The cottage Gill stayed at 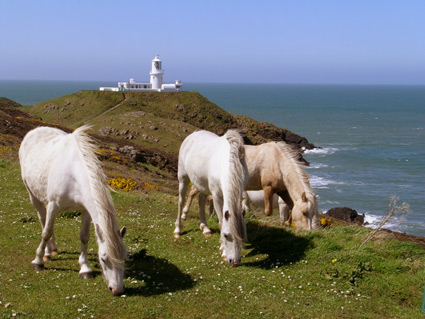 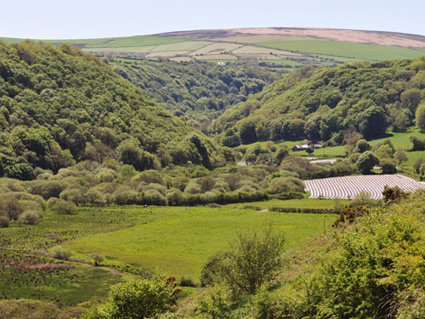 View of the Gwaun Valley 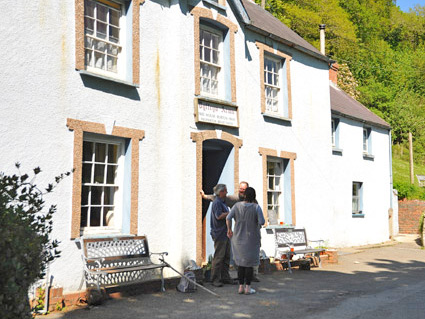 Bessies – aka the Dyffryn Arms

West Wales has plenty of dog-friendly beaches for you and your two-legged friend to enjoy! From Ynyslas in North...