Situated just a few miles along the coastal path from Caerfai beach, Caerbwdy is a fine example of a cobble beach. Well worth a visit at low tide, but do give yourself enough time to explore the caves.

Caerbwdy is probably as quiet cove as you can find anywhere in Pembrokeshire’s peak holiday season, with hardly anyone ever around! If you drive, rather than walking there, remember that there are very few parking places along the narrow lane leading down to the bay. The National Trust extolls Caerbwdy Valley as a “A beautiful sheltered valley running down to the sea”.

Caerbwdy’s cobble stones are generally between 5cm and 25cm in diameter, a lot bigger than normal sized pebbles! Many of the cobbles at Caerbwdy are surprisingly large and walking on them is quite difficult – especially in bare feet!

The beach being predominantly cobbles has only a small amount of sand, exposed at low tide. Purely as a result of wave energy, the cobbles are not only very smooth and rounded but the beach itself is also very layered or stepped.

At the top of the beach is a large bar composed of cobbles are deposited by storms or high tides. Below these are large cobbles that are only moved by high tides and closer to the sea, the cobbles are much smaller and are moved (& eroded) by wave action at almost every tide.

The Cathedral in nearby St Davids is faced with stone quarried from Caerbwdy. The striking red cliffs surrounding the beach are composed of a sedimentary rock, Cambrian sandstone, known for its durability.

They are geologically part of what is known as the The Caerfai Group (St Non’s Sandstone, Caerfai Bay Shales, Caerbwdy Sandstone). They are also a particularly good example of a fold – if you are interested!

Caerbwdy sandstone is, however, vulnerable to weathering which causes the surface to spall and flake and so the architectural details of both the Bishop’s Palace and the Cathedral were in grave danger of disappearing.

The cliffs were originally quarried in the 12th century and shipped to nearby Porthclais harbour, but the quarry was reopened under a special licence from the Pembrokeshire National Park in 1998, so that the stone could be used to restore the Cathedral & the Bishop’s Palace.

One of the few Pembrokeshire Coves to be immortalised in song:

Song to a Phantom Fiddler

I took a stroll down to Caerbwdy Bay, Where purple stones basked on the beach, Cathedral cliffs carved in Aztec slab features, Stood just beyond the sea’s reach, There at the edge of the tide line, which frolicked and lapped at my feet, This melody freely ran into my head, As phantom white sea horses, Rose up, then vanished deep, Wed to the glistering skin of the flood, While the sound waves I heard, In my blood, could be seen, In cannon pulsed breakers of musical sea

One mile east of St Davids on the A487 to Solva

There are no facilities at Caerbwdy, just a lovely cove. If you need access to any facilities or are in need of sustenance head to St David’s to the north or Solva to the south. 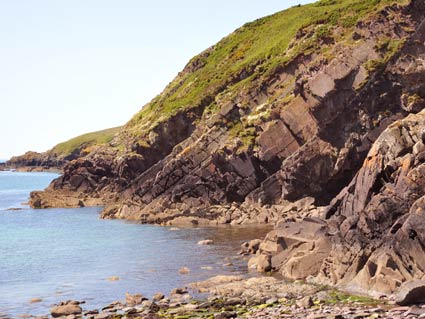 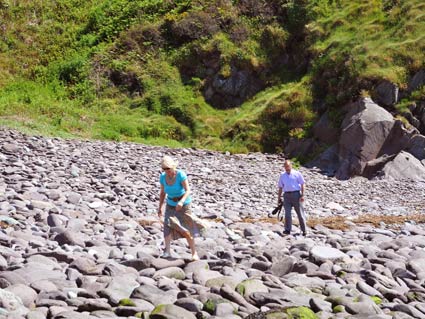 Large Pebble’s on the beach 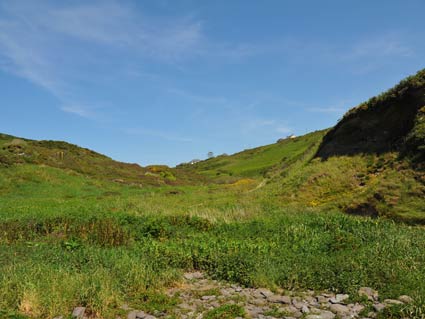 View up the Valley at Caebwdy Bay 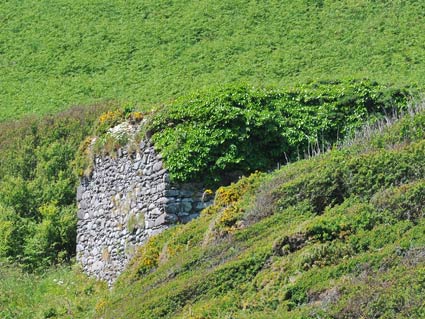